After his first divorce, Mark has very few assets. He was able to retain his superannuation with AustralianSuper, an industry super fund. He and Jenny have bought a house together, jointly owned, and mortgaged up to 70% of its value.

Mark has $600,000 in his superannuation fund, and has life and total permanent disability insurance cover for a further $750,000. He would like to divide his superannuation benefit between Jenny 60%, Cara 20% and Chris 20%. Remember, superannuation is not an estate asset that can be dealt with under a Will, unless Mark makes a binding nomination that all his death benefit goes to his estate. 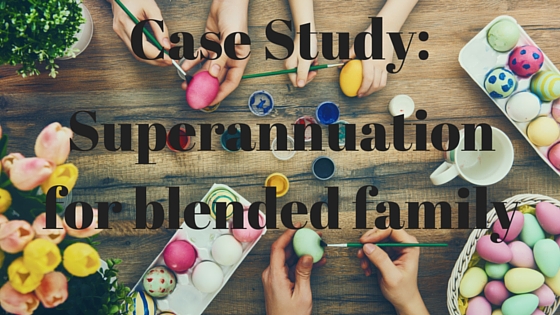 Without a binding nomination to AustralianSuper, the trustee of the super fund is likely to determine to leave the majority of the superannuation (if not all) to Jenny and Lachlan (as a financial dependent and step-child). If Mark wants to ensure Cara and Chris get some of the benefit, he will need to make a binding death benefit nomination. It is important to find out from AustralianSuper whether the binding nomination can be non-lapsing, or whether it lapses every 3 years and Mark needs to remember to redo it. There is a risk that the binding nomination would lapse if Mark forgets to redo the nomination, and his own children could miss out.

Out of Jenny, Cara and Chris, only Jenny would be within the definition of a death benefit dependent for tax purposes. Cara and Chris would need to pay part of the benefit that they receive as tax, at the income tax rate that they otherwise earn. They may not each receive an equal amount after tax.

If Jenny died before Mark, Mark would like to have Lachlan receive part of the superannuation. But if Jenny was dead, then Lachlan would no longer be a “child” of Mark (as he was only a step-child under the definition whilst his mother was alive). However, if Lachlan is still a minor and still living with Mark, then Lachlan would likely fall within the definition of a financial dependent instead, so Mark could nomination Lachlan in that situation.

Mark has given Jenny a power of attorney if he loses capacity. If he loses capacity, he could be entitled to the insurance cover associated with his benefit. Jenny, as his attorney, could withdraw from his fund on his behalf prior to his death. This would render the binding nomination either useless (depending on how much was withdrawn), or would significantly deplete the amount of money that his children would inherit. This would either be a risk that Mark would have to take, or he could prepare a Will with a specific gift clause that tracks any superannuation and ensures it is equalised between his children.