A person affected by family violence can call the Police. The police will decide if they will apply to the Court for an Intervention Order on behalf of the Affected Family Member. 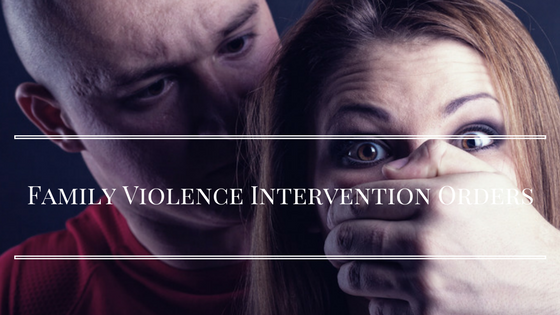 Jane and Andrew were married, but have now been separated for over seven years. Their relationship is acrimonious at best, but they remain in contact because they have shared care of two children under 12. Jane also has two other children with her current partner and they all go to the same school. Andrew had the care of his two children in the school holidays, and they didn’t stick exactly to the Parenting Orders. Jane arrived at Andrew’s house with her five-year-old to collect her children, and because she was excited to see them and it wasn’t the usual day she would collect them, Jane went to Andrew’s residence two hours earlier than the usual changeover time.

Andrew told her she was early and asked her to leave and return at 5pm. Jane did not leave and kept knocking and calling for Andrew to open the door. After 20 minutes, she gave up and left to go back to her residence. Andrew kept the children overnight and with his children on the following day, applied to the Magistrates Court for a Family Violence Intervention Order against Jane. Andrew listed his children on the order as well and in his application as evidence, included every instant over the last seven years that Jane had used derogatory language towards him in the presence of the children.

Jane had the following to consider when assessing whether she should fight the Family Violence Intervention Order:

In Jane’s mind, her actions were not unreasonable and did not constitute family violence. She could have given a background surrounding every text message and email that caused her to use derogatory language and offer all the emails from Andrew that showed the use of derogatory language against her. Jane could have offered that it was Andrew who was committing family violence by his controlling behaviour and not releasing the children, albeit two hours earlier.

Another option for Jane, would be to accept her behaviour and make a conscious effort on changing the way she interacts with Andrew. She could also have submitted to the Magistrate that the conditions that Andrew as applying for were too onerous. In doing so, Jane possibly could have changed her position from that adult who is in denial of her actions, to that of a responsible and proactive parent who is cognisant on what is and is not acceptable and has the welfare of her family as her top priority.

Every case is unique and has its own emotional circumstances surrounding the events. TBA Law is experienced in matters of family violence intervention orders. Should you have any queries and need representation, we encourage you to make an appointment prior to the Court mention date.