Skip to content
Lending money to friends or family

Lending money to friends or family

This is quite often an issue we see at the wrong end, unfortunately – when someone has lent money to a friend or family member and they’re trying to recover it. Or they’re trying to establish that the money is owed to prevent a third person from having some kind of prior claim.

It’s very tricky to do this retrospectively, so best if you can do things right from the beginning!

When learning Contract Law 101 in university, some of the elements of a contract is that: 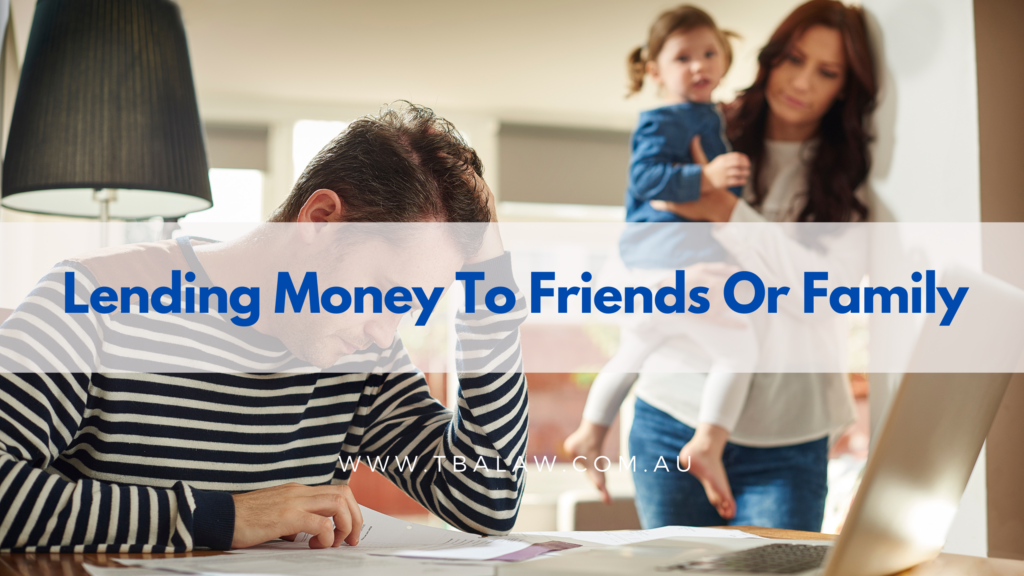 Now, those elements are fairly easy to prove when people aren’t related or aren’t friends, or if they’re in a business context, because it’s assumed that you are engaging in the course of enterprise.

It’s the opposite if you are lending money to friends or family – it is automatically assumed that there is not any intention to form a legally binding arrangement in this type of situation. So if you’ve given money and there is nothing in writing, then it is usually deemed a gift.

if you lend money to friend or family member, and it is actually supposed to be repaid, put it in writing! At least it is an acknowledgement that the money is not a gift.

But what if you’ve lent money already, and you don’t have anything in writing?

If you’re still on good terms with the person who you lent the money to, then it’s easier! If you want to put it in writing, mainly to protect against a third party, or something going wrong in the future, no worries!

You can put in place what’s called an Acknowledgement of Debt, so that there is actually something in writing. The friend or family member who borrowed the money signs that they received it, and that they intend to repay it. They may also give you the right to take some security over their obligation to repay.

This could help in the scenario where you’ve lent money to your child to buy a house, but they’re now in a relationship. You want to make sure that your investment into your child doesn’t disappear if there’s a separation between your child and their spouse.

If you’ve lent money to a friend or family member and since fallen out, and they are refusing to repay the money, then you’re in a very difficult situation.

It’s virtually impossible to recover it legally. This is because you’re got no written arrangement. When dealing with friends or family, it’s not assumed that you’ve lent the money. It is assumed that you’ve given it to them with no expectation to pay it – as a gift.

So what do you do? Well, you can try to prove that there was some expectation that it was a loan. If there was nothing in writing, then it makes it harder. If you have any emails or text messages that does constitute in writing, or do you have other witnesses who have no interest in this arrangement who actually heard what the deal was? But in this scenario, you might be throwing good money after bad.

What would be best, is if you’re lending money to friends or family, do the Deed of Loan in the first place! So super easy; costs far less than trying to recover it later! And then you’ve got proof that it was a loan and not a gift. You’ve got a legally binding arrangement between you, which can be enforced.

Lending money can break down friendships, and it can tear a part families. So if you do it with the right expectations in the first place, it’s nice and clear – expectations are set. It’s less likely to have these problems further down the track.