Stamp duty is a State Government tax, and they put this tax on various transfers of property, primarily real estate. They also took away a whole lot of exemptions and concessions from stamp duty a couple of years ago so it has narrowed down as to whom and when you have a concession. 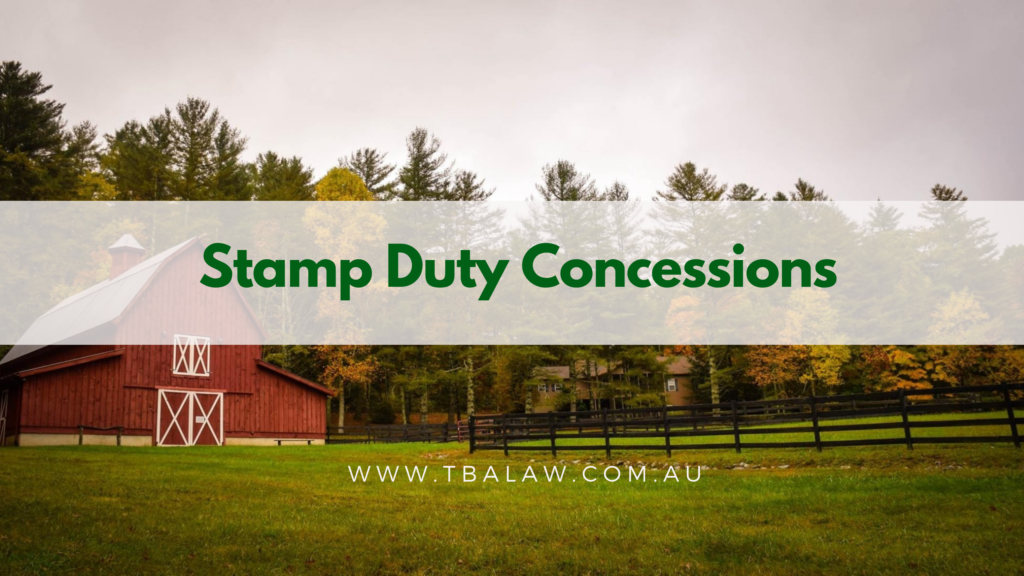 Now, why am I talking about stamp duty? Primarily because when I’m doing estate planning and succession planning, and we have to move a piece of property from how it’s owned in its existing form to make the succession plan work, it often comes down to whether there’s the money to pay the stamp duty or not, to see whether it’s worthwhile doing the transfer.

Now for farmers, we have so much more flexibility because, with primary production land, you pretty much have an exemption if you are transferring it to family or if it’s going into some kind of property trust structure. And really, I encourage farmers to be overly concerned and do their planning, particularly because the State Government is starting to remove some of these exemptions over time and I don’t want anyone to miss out as they did with spouse exemption recently.

If a farmer is wanting to transfer land to a child, to a spouse, to a nephew or niece, even to a brother or sister, someone in the family line, we’re pretty much right to be able to do that without stamp duty.

Stamp duty can be a huge cost, given the price of farming land is continuing to go up and up. Transferring it to someone outright or transferring it so that you get another name on the title, for example, because in succession a joint owner will automatically get the full benefit of that property if the other joint owner dies. That can be a good succession plan as well.

If the land was originally bought in the farmer’s name or the partnership arrangement decades ago, we can look at putting the property into a trust. The other helpful thing about having the property owned in a separate entity from the one that’s running the farm is some asset protection as well. But you do have to be careful when moving farming land into a trust because it has to have special clauses in it so that it keeps that stamp duty exemption. If there is a clause in the property trust which says that the transfer of the property is limited to heirs and people in the original bloodline then you can still have that exemption on stamp duty.

It is important for farmers and people looking to do succession planning, we do have those stamp duty exemptions which can be tens of thousands of dollars. So you save all of that and you can restructure the property so that it’s not in your will, it’s not in your estate, and who ends up with the land is certain because we’ve either done it to via way of another transfer or you’ve put it into a trust.

It is really handy to be able to transfer property between parties to get the ownerships right so that we can move forward having property end up where it needs to be from a succession perspective.

Unfortunately, though, State Revenue Office in Victoria wound back those concessions a couple of years ago. Spouses used to not have to pay stamp duty at all on any properties that they were transferring. However, they’ve removed those, and it’s now only available at their principal place of residence. Spouses can add the other spouse to the title. They can change the manner of holding and transfer it from one spouse to another without stamp duty if it’s their primary place of residence. But if it’s not, we’ve lost all those concessions so it does make planning and doing succession a little bit trickier if it wasn’t done right in the first place.

There’s also not much room for movement with spouses being able to move assets from their own names into a family trust with themselves as primary beneficiaries either. Unfortunately, the State wants to get its tax where it can, and it hasn’t made that very easy for us.

Sometimes it’s worth weighing up whether it’s worth paying the stamp duty so you have certainty now and you know exactly what’s going to happen than leaving things open-ended and potentially have claimed because as we know, real estate is valuable and ever-increasing in value.

We don’t want that to be eaten up in legal fees in a claim on a will. Looking at how people own their assets as part of their succession and estate planning process is really important, and that’s certainly one of the first steps that we do with our family legacy plans.

For first-time homeowners, this is not really from a succession perspective, but it’s important to remember because a lot of people get caught up with the first homeowner grant when the stamp duty concessions are actually potentially more valuable.

There is still a grant in Victoria for first homeowners, $10,000, or if it’s a regional residential property that they’re going to live in, $20,000. There’s that bonus if someone is going to live regionally. It’s also not available on properties of a certain value, so you get penalized if you’re wealthy enough to buy something expensive. And likewise, there is also a stamp duty exemption or concessions for first homeowners. As I said, this is potentially worth more than your money. You get a complete exemption from paying stamp duty on your first home purchase if it’s under 600,000, and a partial, so a concession if the property is between 600,000 and 750,000 for first homeowners.

It’s trying to stimulate and make it more affordable for housing. It also rewards first homeowners looking to regional properties, looking at new or properties within a certain price range. It’s not, as I said, something that would be thought about really from a succession perspective in terms of family farming or spousal transfers, which is what I spoke about for the last two weeks so you can go back and have a look at those. The only thing to think of from a succession perspective for a first homeowner is the eligibility requirements. So if you’re with a spouse who has owned property before but you haven’t, it then means that if you try and buy something together, you’re not eligible. So you need to think about how you’re going to structure that purchase and whether it’s honest of you to sign a document if you decide to buy it just in your name, that you do meet that eligibility requirement. So it really is for couples to get into their first home, so you do get penalized if one of the spouses has owned property before.

So yes, bear that in mind. The stamp duty concession and exemption is potentially more valuable than the grant so keep that in mind when you’re looking around for hopefully your regional property because you get more bonuses or more grants and you’re more likely to fit within the exemption category as well.