The Role of the Mediator

Sometimes parties may choose to enter mediation voluntarily in order to attempt to resolve their dispute between themselves without spending the time, stress and expense of litigation. Another circumstance where mediation plays a key role is where parties may choose to commence litigation in a suitable court or Tribunal for their dispute and as part of the civil litigation process the court will order some form of alternative dispute resolution. One of the main forms of that being mediation. Mediation can also be helpful in some family conflicts and family law disputes. 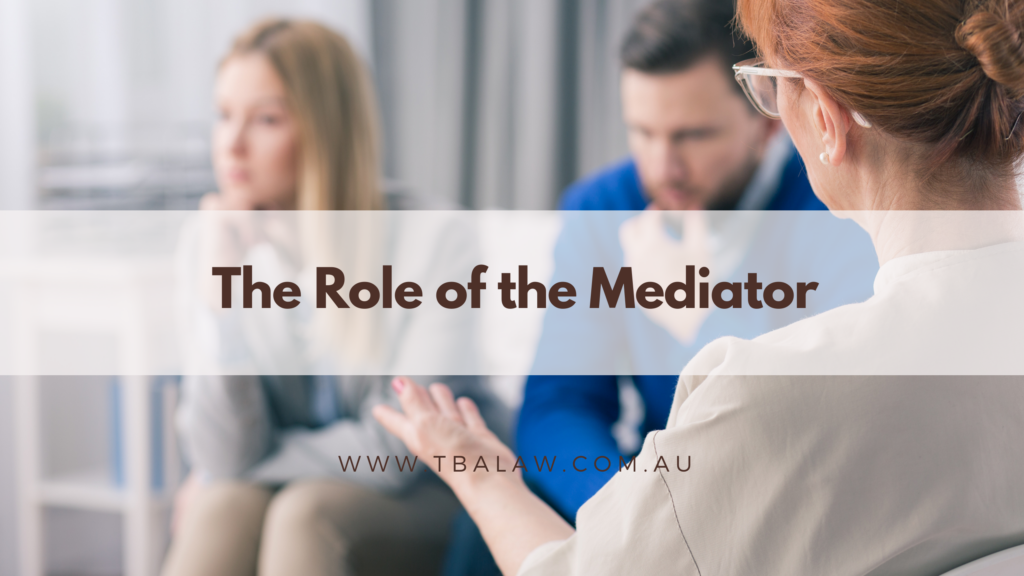 There are many forms of mediation and not all disputes will be suited to this form of ADR, however this blog will focus on the facilitative mediation model which is the NMAS recommended method. Clearly, if you were to hold a mediation you would require a mediator, otherwise you would merely have two parties having a discussion between themselves regarding their conflict and dispute. This could be counterproductive or even dangerous, and very often a dispute will reach litigation, or mediation, or compulsory mediations as a part of the litigation process, because the parties could not resolve their dispute by merely discussing it between themselves.

The mediator is a neutral third party, and we use catch phrases like facilitating communication between parties, promoting understanding of a dispute between the parties, and allowing them to explore the aspects of their dispute to attempt to promote understanding of the issues of the dispute, when describing the role of a mediator. The aim of the mediator is for facilitating communication in a way that will assist the parties that are in dispute to reach some form of resolution, settlement or solution the deal with the issues that are in conflict over by reaching their own agreement. A mediator will not tell parties what they have to agree to, they will not force parties to agree to anything, but rather they are there to facilitate and encourage the parties to work it out for themselves.

A mediator should make clear early in any session how the session will be conducted, so everybody knows what to expect. They should also sit down some basic ground rules for every party and participant to follow, and these will include things such as listening to each other, not interrupting each other, and knowing that each party will have a chance to speak. The mediator will also remind the parties in majority of situations that what is said at a mediation is on a without prejudice and confidential basis, so the parties feel safe to speak about the issues, to explore the issues deeply and to try and come up with Solutions without feeling like they are losing a legal position they make currently feels a hold, or fear they may place themselves at a disadvantage should that matter not settle at mediation and end up in Court.

The mediator should ensure that the parties follow the rules at all times.

The role of the mediator will also see the mediator encourage the parties to identify the issues and form an agenda for the session, to keep everyone on track. They will remind the parties that to explore the issues can get a little uncomfortable as sometimes this is necessary for the participants to understand each other’s perspective, and to use this information to consider possible solutions. Following on from this,  what the mediator should do is use their position to reflect back to the participants what they are saying what they are speaking how they are feeling and in saying that, the other party may really hear the other’s position for the first time.

Where ground rule are being broken or one party is acting in a threatening, dangerous or violent manner, or even acting as a bully, it is the mediator’s role to diffuse this situation, as none of these behaviours will allow the parties to come to a suitable outcome for both of them.

A mediator may remind parties of the consequences of not reaching a solution, being the cost, expense and stress of a trial, and the fact that control will be taken away from them and placed in the hands of a judge and they lose their voice in the issue. However the mediator should not be pressuring them to settle if they are not satisfied with the solution being presented.

Having a mediator in the room with the parties can often make all the difference in keeping the parties on track, feel safe, and it really can assist the parties to find their own solutions themselves. Where the Mediator fills their correct role, as described in this blog, a solution for everyone involved is very often the end result.

Rochelle is an accredited NMAS mediator and practicing solicitor in the area of civil litigation.

If you would like to schedule a mediation, visit TBA ADR to explore this option further, or get in touch with us at 1300 043 103.