When a custody arrangement isn’t followed, it can be a very stressful and upsetting time for the respective parties. That’s why it’s best to be aware of what can cause an issue, and what things you should do when the issue is more serious.

There can be many reasons why parents don’t follow custody arrangements, and it’s important to be aware of those. It’s also important to be reasonable and levelheaded when it comes to these sorts of things—custody deals with children, after all. If there’s a more serious breach, that’s when we need to consider legal action. 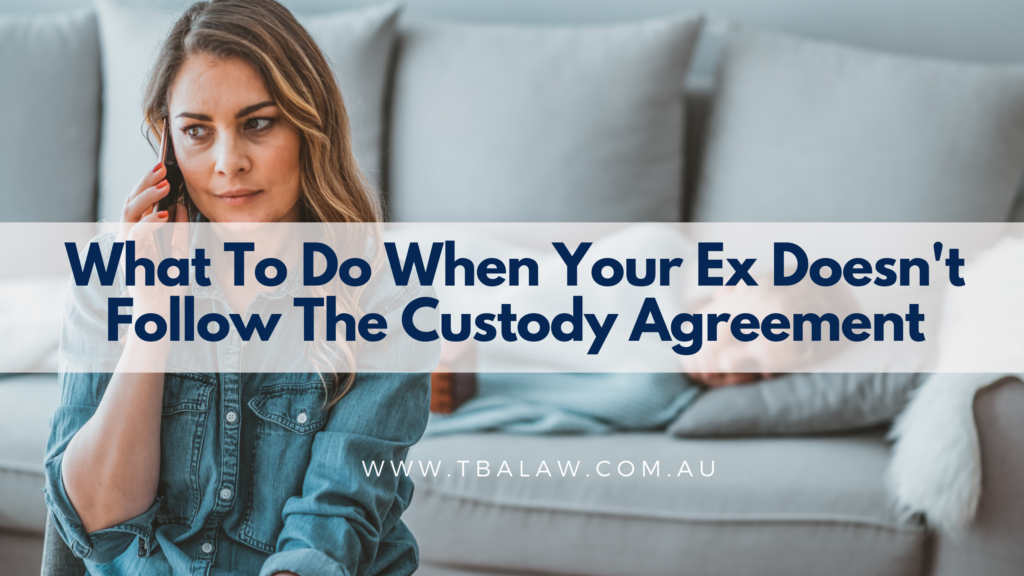 When considering how to proceed with a parenting arrangement or custody agreement, the first thing you should know is whether there is a written document or order in place. If so, it may be helpful to know what kind of document it is: A parenting plan or consent order? A legally-enforceable order of the court? If there’s a parenting plan in place, this is an agreement the parties come to by consent, they both sign it. It is legally acknowledged, but not legally enforceable.

In other words, a parenting plan isn’t actually enforceable by the court. It’s merely acknowledged as the arrangement you’ve agreed to. If there’s a consent order or a court order in place, the court does have the power to force parties to abide by these. However, that would be very much a last resort.

When your ex-spouse breaks a custody agreement, your first step depends on the severity of the breach. There are obviously breaches ranging from, “My husband was supposed to drop the children back at four o’clock, and he dropped them back at five.” And then there’s “My husband hasn’t dropped the child back since last week.” There are two very different levels of violations and two very different levels of approach.

Talk directly to each other and work out an amicable agreement

When possible, it’s best for the parents to talk directly to each other and work out an amicable agreement. This is beneficial for the child in terms of maintaining a good relationship with both parents and also in terms of saving on legal fees. If both parties can mediate their differences on their own, all the better. Obviously, this isn’t always appropriate or the best case, particularly if there has been violence between the parents in the past or if there’s been a serious breach of court orders.

The second approach we recommend is mediation. It often depends on the severity of the breach and the urgency of the breach. Courts will sometimes require mediation before dealing with an issue, particularly if it’s one of those issues like: I only get the kids ’til four o’clock on Mother’s Day and I want them overnight Mother’s Day. These are relatively minor issues in comparison to other things, so it’s really important that if parties can mediate. Mediation is a very low-cost resolution, and it can be done through Relationships Australia. The cost will be approximately $80 per party. Parties may also choose to mediate using a barrister and solicitor, but that is a more costly option.

Have A Solicitor Send Your Ex a Letter

Another option is to engage a solicitor to correspond with the other party. This might be preferable before going to court, particularly if you need to put the other party on notice that you might be applying for an order. However, letters between solicitors can add up very fast and may not have the desired effect.

The most serious approach that can be taken, is a contravention order. A contravention order of the court is when you apply to have something dealt with by the court. This happens when you say something wasn’t dealt with properly. Like I said, the court probably doesn’t want to deal with or won’t deal with something as simple as changing times on Mother’s Day, or another party dropping the children back an hour late. What they will deal with, is if a child isn’t returned to someone’s care or if a child is exposed to risk. They can be expensive to obtain. We do recommend that you get special legal advice. One potential avenue in a contravention order is what’s called a recovery order. This allows a parent who has custody of the child to have the Australian Federal Police return the child to his or her custody. It is a last resort option.

It’s also important to note that if you break a parenting order or parenting arrangement, it can be excused if there’s a good reason. We’ve seen this a lot during COVID, where children were kept inside the house by their parents because of COVID. For example, they were not allowed to leave the house or children had to be dropped back late. Alternate arrangements had to happen since COVID was in effect.

So, it is possible that you might think an order’s been contravened, but there’s a reasonable explanation for why that has happened. We recommend people make sure that logic prevails. Like I said, we saw many cases where COVID showed us how these parenting contraventions manifest themselves. The court actually dealt with these issues in a special COVID-19 list, if that’s the issue. But for the most part, serious matters need to be filed urgently with the court.

Hopefully, other people in a similar situation will find this article useful. We haven’t covered each and every possibility and every scenario, but we have given you some things to consider when trying to get your ex to start following the custody order. If you have any questions at all or if you feel we’ve omitted anything, please don’t hesitate to send us an email at [email protected].

At TBA Law, we work with families who are dealing with this exact problem. We’ll help you come up with a plan so that both parents understand what needs to happen when one parent doesn’t follow the agreed-upon custody schedule. We’ll also help you figure out how soon after the incident happens that you should take action—and what kind of action would be best suited for your situation.