After someone dies, and there are members of the family who are not happy with the Will, there are ways to resolve this without going to Court. You can reach an agreement to do things differently, rather than sticking to the Will, if someone challenges the Will.

Here are 4 tips to keep your family out of Court:

There are reasons why there are laws allowing a Will to be challenged, and often it’s because a Will is not fair. Someone’s wishes in their Will may not be fair.

Many husbands have left their wives out of Wills. Many parents have left sons and daughters out of Will because of words said in anger decades earlier. 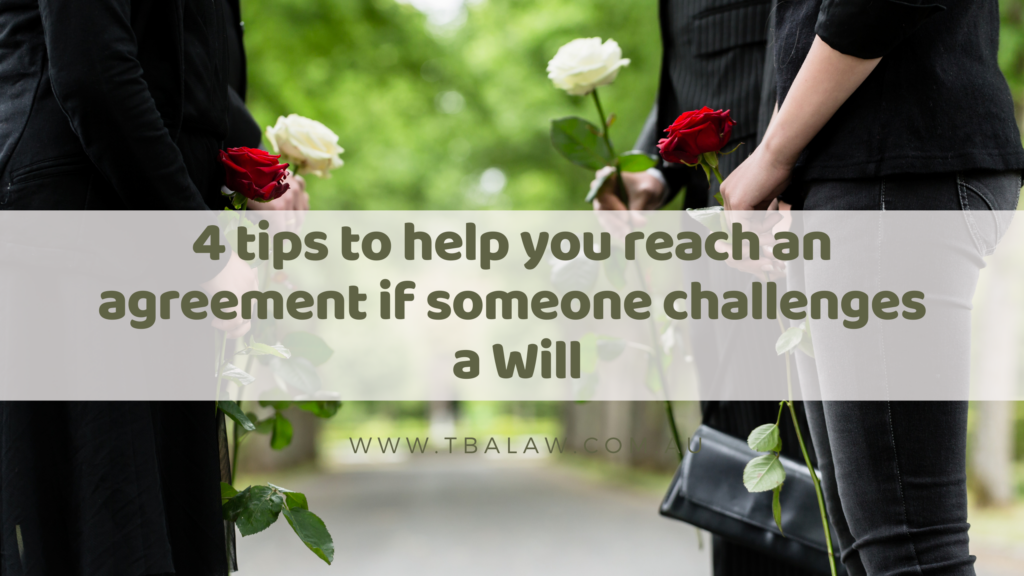 It is possible, that if a Will is not fair, that it can be changed by the agreement of the surviving beneficiaries.

Look at all the options that the Will gives you first

There is often a lot of flexibility in the powers given to executors under a Will. Some of these powers include postponing a sale of a house, by agreement. The powers could also include not selling assets at all, but giving assets to people as part of their share – or having them pay to keep an asset if its value is too big.

There may be more flexibility and options than you first think, when someone challenges a Will.

Exploring all the options, before you rule anything out, may result in a solution that keeps everyone happy.

Get a good understanding of the financial position of all the beneficiaries, as well as the aggrieved person

If someone challenges the Will, not everything evolves around them. The financial position of the other beneficiaries is also relevant. Someone else who hasn’t challenged the Will might be worse off.

In fact, the person challenging the Will might think a bit differently if they realise that they are leaving someone else in a worse position.

This is where an independent financial advisor can help. The position of the beneficiaries could be modelled, so different scenarios can be assessed with actual data rather than assumption.

If you want to keep control of the process, then you don’t want to end by in Court. There is a process, called Collaborative Practice, that involves everyone signing an agreement that they will commit to resolving the issue without going to Court.

This would include having lawyers sign the Collaborative Practice agreement, as well as having a mediator and an independent financial advisor. It usually takes between 3 and 6 meetings of a couple of hours each, and has a higher chance of success than any other alternative dispute resolution process.

The resolution is usually more successful, because the family can stay together, and its usually a win-win outcome, rather than a litigious Court outcome.