Equalising Inheritance Through Your Will

People will often want their children to have an equal share in their estate, and in giving instructions like this is a solicitor, many may not consider non-estate assets. If a will-maker truly wants their children to all be treated equally, then they also have to consider:

An equalisation clause in a Will to deal with superannuation is often important, or alternatively, having the superannuation paid into the estate so that the estate pays the tax to ensure an equal distribution thereafter.

Other than superannuation, there are other gifts that might need to be equalised. These include gifts of assets or money whilst the will-maker is alive. A true equalisation of an estate would mean that a hotch-pot clause is inserted in your Will to make sure that any gifts whilst you are alive are also considered.

One problem with hotch-pot clauses is whether a “time benefit” is to be calculated into the gift, or whether it should just be taken to be the amount at the time of the gift. For example, if one son received $250,000 in 1996 needs to be equalised, does the amount of $250,000 get used, or does the amount of $1,000,000 get used (which is the value of the asset that he was able to buy with the gift)? 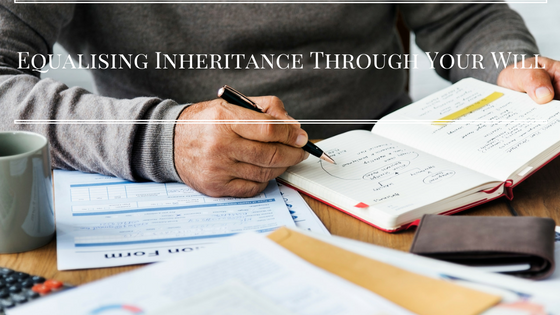 Another gift you could make is to allow a child to use an asset free of charge during your life. If one of your children lived in your house for free for 8 years, should this benefit be adjusted?

So, whilst trying to ensure your children are treated equally is an admirable aim, often the actual effect to trying to achieve this is not fully understood either by the solicitor drafting the equalisation clause, or sometimes the will-maker forgets how it works. This can be quite technical, and both solicitor and will-maker need to understand the full intent.