Grey divorce, which is a relatively new concept, essentially refers to parties over the age of 50 who are separating.

It is something that is on the rise at the moment, so a lot of parties tend to leave until they’re over the age of 50 or 60 to get separated purely because they’re waiting for the kids to grow up and leave home. It is something we’re definitely seeing more of and, in fact, the average age of party separating has increased from the mid-forties to their actual in their fifties. 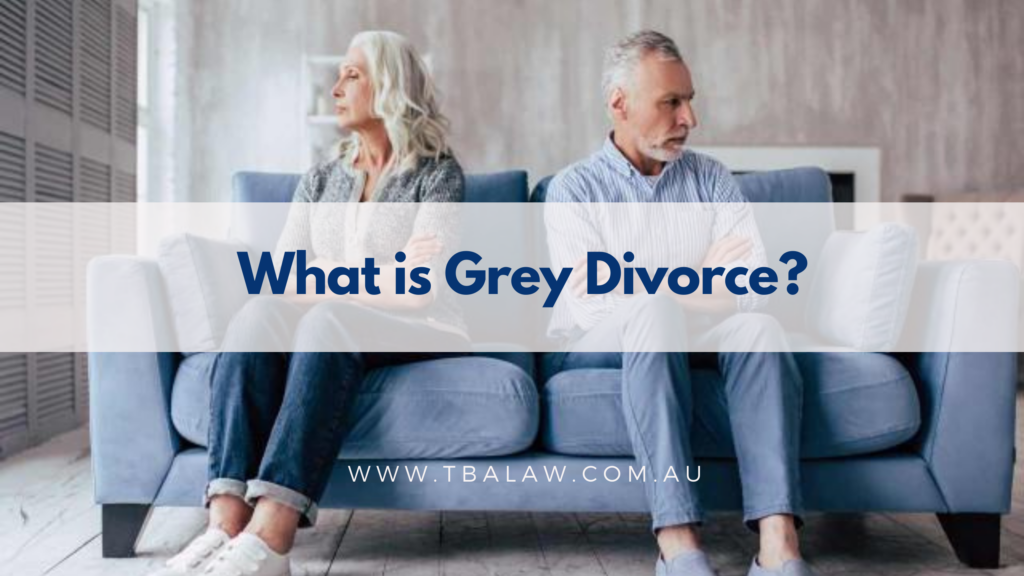 Grey divorce comes with a set of few unique challenges.

One of the biggest challenges is that their income might be different from when they’re younger. This could be because they have already retired and they might be living on pensions and superannuation, or it may be because they’re about to retire.

They might be in their mid-fifties looking to retire shortly or mid-sixties, which means that any changes to their situation could have a very dire impact on their quality of living for the rest of their life.

Superannuation is particularly important, because it is often such a huge asset. The challenge arises in more traditional type families, where what we have (and it is quite common unfortunately) is the husband as the breadwinner and the wife as the homemaker. We do see the situation arising where women have less superannuation than males because they have spent less time in the workforce.

Superannuation often is one of the largest assets in the relationship so it’s important to make sure that when it’s divided, it’s divided fairly.

Another major issue we see in older couples retiring and then separating, is where they’re going to live. Often when you have marriages that have lasted for decades, one person wants to buy the other out of the former matrimonial home so they can keep the memories of that place. This is all well and good but funding this can be a very big issue for some parties, particularly if income is declining.

Unfortunately, a lot of the time it means the house does need to be sold, and they need to try and find somewhere else because they might not be able to afford that property.

Again, it can be incredibly hard to refinance to buy out the other party, because of the limitation on income coming in. Banks, particularly the bigger banks, are incredibly hesitant to lend.

Having said that, even if one party is bought out of the former matrimonial home by another party, they may never be able to buy again. The amount they get paid out might not be enough to buy a new home, and they cannot lend to buy because of their lack of income.

No matter what your circumstances are when you’re separating, however old you may be, definitely look into meeting with a financial planner. I refer all of my clients to this service and we do provide referrals to financial planners who will be able to help under your circumstances. The main reason for this is because when you’re already retired, any separation can have major impacts on your income stream, including your pension as well, so there are different rates of pensions for individual parties versus parties in a relationship.

There needs to be either an agreement between the parties, otherwise it goes through the courts. It is imperative that parties try and resolve these matters outside of Court, given the potential for huge legal costs and a lengthy battle in Court. Parties have an obligation to the court to try and resolve it outside of the Court, whether that be through negotiations or dispute resolution or mediation. Part of the process of negotiating, is getting financial disclosure – valuing assets and making sure everything is valued correctly, valuing superannuation, exchanging bank statements and the like. Then a lawyer can negotiate the finer details.

These are some of the unique challenges faced by people later in life who are separating. Regardless of your circumstances, I do recommend you seek legal advice if you are in the process of separating, and as well, financial advice is incredibly prudent. Separating will alter your financial situation, your assets, your liabilities, and particularly your income stream, and if it may have an effect on what you can borrow, where you will live and the like.

Our office is available for appointments via Zoom, in-person, and on the phone and we can be contacted at any time via email at [email protected]