Skip to content
Insider Secrets About Drafting A Will That Works

Insider secrets about drafting a Will that works

It’s the little things that make all the different, and in the language of estate planning and Will drafting, every word has a meaning or interpretation that is based on hundreds of years of precedent. It’s not a simple process, and there are plenty of aspects that could catch the unprepared – particularly when the standard nuclear family is the minority these days, and there are so many blended families. 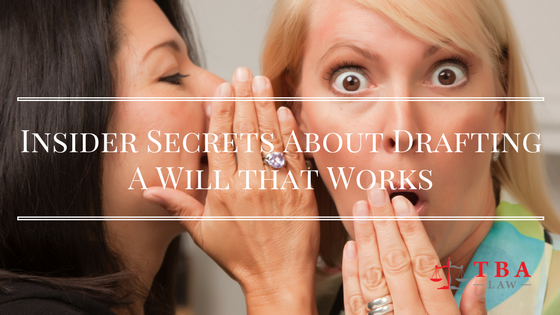 It’s a rule in the Property Law Act, rather than in any legislation about wills or estate administration, but it affects estate planning – that rule is that when property is jointly owned, and the owners die together, it is deemed that the younger of the couple dies second.

Hence, the joint property doesn’t get divided equally between the estates of the two people. It is deemed that the older of the two died first, so the ownership goes to the younger of the two. Therefore, the property ends up in the estate of the youngest person, and goes under their Will.

This is often why we try to make couples have mirror images wills as often as possible. Particularly where there are no children of the relationship, and there are children from previous relationships, and we are trying to balance the interests of the step-children in each person’s estate.

For example, Bill and Jane married later in life, having divorced their previous spouses. Bill has three children from his first marriage, and Jane has two children from her first marriage. They don’t have children together. They each own an investment property, and they have bought their new home jointly. They really want to make sure that their own estates go to their children, as they have agreed that they don’t really need each other’s money. But because they jointly own the main home, which is one of the most valuable assets, they cannot split this to one estate or the other. If Bill dies first, the house automatically becomes Jane’s and she wants to leave her estate to her children. If Jane dies first, the house becomes Bill’s and he wants to leave his estate to his children. But neither want to give up their half of the house to the other’s children. So they have to provide for each other’s children in each other’s Will after all. Either that, or change the way they own the house from joint proprietors to tenants in common.

Another place where people can get caught out is under the law of intestacy, when someone dies without a valid Will. If they have separated from their spouse, and even done their financial settlement under the Family Law Act, it is crucial that a new Will be prepared at this point. If a Will is not done and divorce is not done, then the separated spouse will get the majority of the estate, regardless of any financial settlement!

We will use Bill and Jane as an example again. Jane had a Will with her first husband. After she married Bill, she didn’t do another Will, so her new marriage invalidated her old Will. Jane and Bill later separate, and decide to go their separate ways. They have a financial settlement and get on with their lives. Jane is diagnosed with cancer, and dies 6 months later, without having done a Will. Her estate is managed by the laws of intestacy, because she didn’t have a valid Will. Despite her separation from Bill, they are still married spouses for the laws of intestacy.

Jane would have wanted all her estate to go to her children, but she didn’t make a Will to take effect. If she had divorced, then the law of intestacy would dictate that her estate was divided between her children, but she didn’t know that she needed to get the divorce done. So, under the law of intestacy, Bill is entitled to the first $450,000 of her estate, plus another third of the balance. The remaining two thirds are divided between her children.

It became very popular about 50 years ago to provide a ‘right to reside’ or a ‘life interest’ to a spouse in a Will, to make sure they had somewhere to live on the death of the first person in a couple. But these days, life expectancy is far longer than it’s ever been. Whilst most people want to stay in their own homes all the way up until they die, the reality is that many get to frail to stay at home, or they develop dementia or other illnesses that mean they need to go into aged care.

The bond that someone pays to go into aged care is called the ‘Refundable Accommodation Deposit’ or ‘RAD’. It is always a concern about how the RAD is funded. Often, the family home needs to be sold so that the RAD can be paid.

If someone only has a right to reside in the family home, or a life interest, it is possible that the house cannot be used to fund the RAD. This can leave the surviving spouse in a very difficult situation where they need to borrow money to make sure they get the care and accommodation that they need.

Using Bill and Jane as the example again – the couple doesn’t separate, and they end up selling their big family home and moving into Bill’s investment property which is much smaller and easier to manage. Bill dies at home in his early 80s, and doesn’t want his children to sell the house from under Jane, so gives her a life interest in the property. She is allowed to live there until she dies. Jane stays in that house until her late 80s, but then becomes very frail and has a fall in the house. She is assessed and it is determined that she needs to stay in aged care. Bill and Jane had lived it up in their retirement, and most of their savings have been spent by the time Jane is 88 years old. She has some money in the bank, and the life interest in the house that was originally Bill’s, which is supposed to go to his children after she dies. She needs to raise $280,000 to pay the RAD to go into aged care. She doesn’t have this money, and the life interest that was written into Bill’s Will doesn’t give Jane the right to use the capital in the house for her aged care accommodation. She is stuck, and has to rely on a loan from her own children, if they can raise the money.

With the changes in Victoria to intestacy laws and the categories that can make family provision claims, it is getting harder for someone to prove that they were in a domestic relationship with someone.

There are a couple of other options available for a spouse that doesn’t think they will meet the domestic relationship status: