Skip to content
Parenting during separation: disciplining and educating your children

Parenting during separation: disciplining and educating your children

When couples separate, there can be quite a bit of difficulty in terms of where the children go to school, what extracurricular activities they do, and how their medical needs are met. As well as different parenting techniques that can become apparent once the parties separate, parenting during separation has many challenges.

The most important fact to know is that in family law, there’s a presumption of equal shared parental responsibility. What that means is that both parents have the equaled power to make the long-term decisions relating to their children’s lives, and unless a court makes an order to the contrary, that presumption stays in place. So unless you have an order saying that that’s not the case, you must have the other person’s consent when making those long-term decisions. 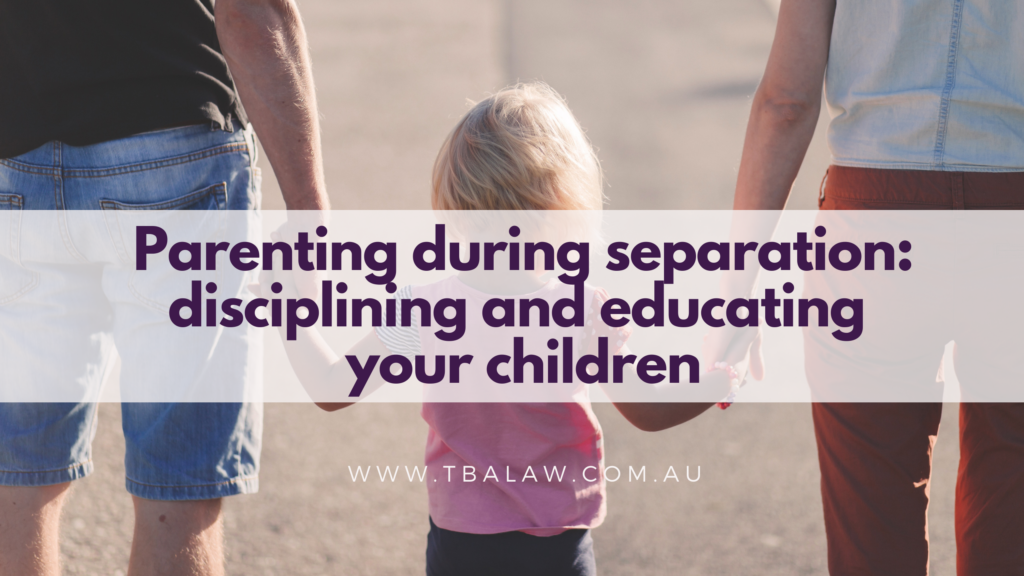 As I said, equal shared parental responsibility is the presumption. The court can order it, but they are very hesitant to alter the presumption purely because it is such a large decision to take parental rights off a parent. It really affects the other parent’s role and their ability to make decisions regarding their children while parenting during separation.

If you cannot agree, that is when you might need to consider either legal action or the mediation process in the first instance. It’s not only easiest to mediate first through Relationships Australia, it is a requirement under the act. You can determine what’s best, and that will be facilitated by a mediator who will help facilitate discussion but will not decide for you.

When trying to make this decision for yourselves, along with the media or potentially even a court, there are many things to be considered. For example, if you wanted to send your child to a private school, but your partner said no, it may be because your partner cannot afford that school. So as a general rule with private schooling, the enrolling parent is the one who bears the cost of the fees under the contract with the school. However, normally, both parents will enrol under the equal shared parental responsibility so it does get a bit messy there. It’s probably worth documenting who will be paying the school fees in those circumstances.

With the location of the school, it’s normally pretty common for the parent who has the majority of the care to have school closer to them. So if the child is with the father all day during the week and, obviously, it’s the mother every second weekend, then it would probably be the school closest to the father. It’s more practical, it’s more reasonable for the children because, at the end of the day, any decision made must have the best interest of the children at heart.

Again, with schooling, just to summarise that, really is just to make sure that both parents agree and, if it cannot be agreed upon, that mediation is always the first step. It’s the most cost-effective step. But, obviously, court action can be considered further down the track if it is necessary, however, there are significant costs involved, it can take a long time, at which point a child gets involved over the circumstances.

Another important thing about schooling is the older the child is the more their view will be taken into consideration. For example, a Preppy who is just starting school probably won’t have a lot of say in what school they go to. Whereas if a child is moving from Grade Six to Year Seven, the court is probably more likely to take into what they want into consideration, which is probably where their friends are going, or something like that.

Now, another issue we commonly have arising is religion, so wanting to raise a child in faith, whereas another parent may not. That’s the most common scenario we have when one parent is religious and the other is not. For that, you each have the power to make the decisions for the day-to-day raising of the children. So while the children are in your home, you do have the power to take them to church, for example or something like that. And, again, the older the child gets, the more they can make those decisions for themselves. You, obviously, can’t force children to become religious, but you can encourage it in your time with the children. So even though you have equal shared parental responsibility for those long-term decisions, during the day you have the power to make those day-to-day decisions as they arise.

For that day-to-day routine, it could be things like what time the children go to bed, what meals they ate, what sort of diet they eat, what after school activities they do if they’re going to after-school care. After-school care is a big one that arises with issues of parenting during separation. Parents find it quite unfair when they might have the kids for… One parent might have the kids for five days during the school week and every week after school, they’re in after-school care for a couple of hours. But in those circumstances, it is the parent who has the responsibility for that child on that day to make those decisions about where they’re going, although you may wish to have a negotiation to see if you can get that time with the kids with you, instead of outsourcing it to someone else.

Obviously, it’s a very serious allegation to make. But if you do have concerns about the welfare of the child that it is not just corporal punishment, then it’s your responsibility as a parent to do what you believe is in the best interest of the child and potentially make an application to the court to have the care arrangements altered for the benefit of the child.

To recap that whole thing, both parents have equal shared parental responsibility for the children. It does not go away without a court order, and a court is unlikely to make an order, so each parent has a very severe obligation to try and make things work where they can. Not always possible, but it is the ideal situation when both parents can agree.

If they can’t agree, they may need to go down the mediation path where a lot of parenting during separation problems can resolve. The family dispute resolution centres are very good. They’re very cost-effective and they allow parties to discuss in an area that is neutral to both parties, as well as there’s someone there to facilitate discussion so it might not get as nasty as it would just directly between two people.

Then, obviously, if that doesn’t happen, it can go through the court process. It is always the last resource. There are no time limits on making an application so it can happen whenever. But it is always important to remember that the time it will take to achieve that, the cost it will take, and therefore the benefits of agreeing on your own.

But, overall, in terms of making those day-to-day decisions, each decision lies with the parent that the child is with, and the older the child becomes, the more say they have over what is going on in their life. Try telling a 15-year-old what to do, I don’t imagine it will go very well when they say they’re going into a different school, or they have to go to church or something like that.

We are available for initial family law consultation should you like to discuss your rights. Get in touch with us on 1300 043 103 or send an email to [email protected].