If you are pleading not guilty to summary (less serious) criminal charges in the Magistratesâ€™ Court of Victoria, donâ€™t expect that you or any witnesses will be cross examined by a barrister at the first court hearing. To the contrary, your time in front of the magistrate is likely to be brief. 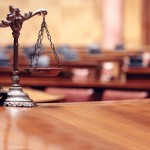 When first arriving at the court house, in most Victorian Magistratesâ€™ Courts you join the queue at the front counter to tell the staff that you have arrived, or you take a docket and wait for your number. If you have not retained a lawyer, you can get free legal advice from a duty lawyer at the Court house. You should ask the court staff about this when you speak with them. While the duty lawyer should give you legal advice, they usually wonâ€™t actually speak for you in the court room.

If you are pleading not guilty, the next thing to occur is that you / your lawyer will negotiate with the police prosecutor. In some cases at this first hearing you / your lawyer will be able to negotiate with the prosecution for the charge(s) to be withdrawn, and that will be the end of it. However, this is uncommon and will probably only occur if new evidence came to light after you were charged, but before the hearing, such as new witness statements or CCTV footage. Even if this happens, the police informant and prosecutor need to have an opportunity to consider the new evidence and then conclude if they want to withdraw the charges. This is often a bit much to expect to happen at the first court hearing.

If you and your lawyer decide that you want to continue to plead not guilty, and the prosecution do not agree to withdraw the charges, then you / your lawyer will discuss the further conduct of the matter with police prosecutor. If it is agreed that the case should return to the court for a further hearing in the future, you may need to discuss mutually suitable dates for the next hearing with the court staff. This is often 4 â€“ 6 weeks later. Once a mutually suitable date is determined, you can tell the court staff that you are ready to have the case called into the court room.

Once your case is called into the court room, you / your lawyer will go to the â€˜bar tableâ€™ at the front (facing the Magistrate). You / your lawyer will then explain to the Magistrate that you and the prosecution were unable to finalise the matter, and have agreed to have the case listed for a further hearing (usually called a â€˜contest mentionâ€™) on the agreed date. The Magistrate will likely make this into an Order of the Court. If you are on bail, then you will also need to have bail extended to the next hearing date. Once the Orders have been made, you are free to leave the Court house until the next hearing.

Before the next hearing, you / your lawyer will probably want to have some discussions about the case with the police informant if there is new evidence to consider. It is always possible that the police will agree to withdraw the charges, or seriously downgrade them, if new evidence in support of your defence comes to light.

If you have been charged with an offence, do not hesitate to contact Theobald Lawyers for confidential advice and competent representation.

Contact us to arrange a chat with one of our legal professionals. It doesnâ€™t hurt to ask.