We have recently completed a large subdivision in the local area, whereby some developers were able to turn a large, 100 acre property, previously used to farm sheep, into 50-odd residential blocks which could be sold off for profit. This scheme has also left them with plenty of room for further stages and developments in the future. 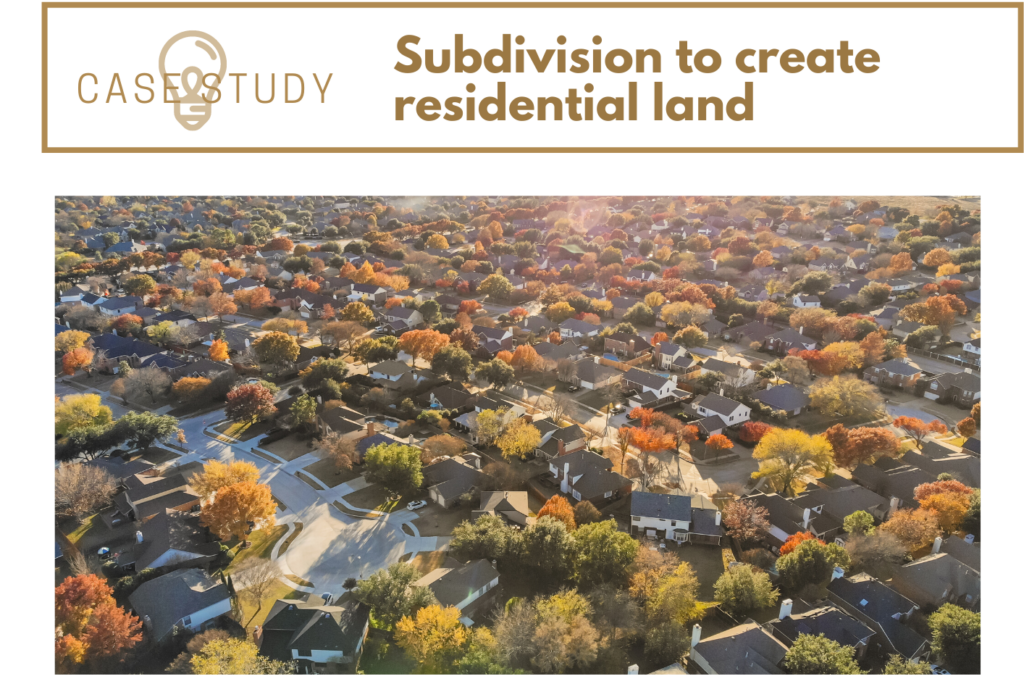 The first step to subdividing land is to find the land. Luckily, some of the owners of the developing company already owned the land, so it was a matter of transferring the land into the developer company. However, there are many factors to take into consideration when finding land, most particular, zoning. To develop residential lots, a council will likely want the land in a “residential zone”. They are unlikely to let farming land be converted to residential land without first undertaking re-zoning (which would need to be in their long term plans).

The next step is to find the licensed land surveyor. This is the person who will draw up the “Plan of Subdivision”. This may look easy, but there are many factors that need to be taken into consideration, including layout, turn around requires, underground services, connection to existing infrastructure and meeting council requirements.

This means it can take months or even years to complete. The land surveyor is also the one who applies for the planning permit, which is a document given by council setting out what will be require for them to give a “Statement of Compliance” for the subdivision.

The next step for our developers was installing the infrastructure, which on this project included roads, streetlights, curbs, underground services like electricity, water and gas, and may also include requirements to develop areas or reserves for public space and parks. This can take anywhere from a few months to over a year to complete, depending on the extent of the works and the weather conditions. This process in itself, depending on the size of the subdivision, can cost millions.

Occasionally, as the case was for our developer, a requirement of the planning permit may be to have what is called a section 173 agreement with the local council. This is an agreement between the developer and the council about requirements of the subdivision or future use of the land. For our developers, it was an agreement that the land could not be further subdivided in the future and that a restrictive covenant would be placed on the land. This was done by council’s lawyer, but can also be done by your own depending on the local council.

Once all the physical works were completed, our vendors had to gain compliance for the works. This includes all relevant authorities and service providers stating that the works were up to scratch and in line with requirements. These authorities can include the water authority, electricity supplier, gas supplier, NBN and phone services, VicRoads and finally your local council. This in itself can take a few months to complete, especially if rectifications are required.

Then, we finally become involved! The final step of the subdivision itself is to subdivide the land once compliance is issued and the land surveyor has released the subdivision to us on the relevant program. Although it is normally pretty quick for us to submit the documents, it can take weeks at the Land Titles Office for the new titles to be issued, especially if the Land Titles Office issue requisitions or require more information.

Another important person to have working in the background is a good accountant, who can explain the GST components and ensure the developing company is structured correctly.

Overall, this land development took 5 years from the initial idea to the vendor’s seeing a profit. In the meantime, money was borrowed and many outlays were made.

The main takeaway from this case study can be put simply- this is not a quick cash making project! To create a large subdivision which creates a profit requires time, a lot of patience, and having the right team around you.