Skip to content
Divorce and financial separation: know the difference

We’re going to be discussing the difference between a divorce and financial separation, which are often confused when parties are just starting the process of family law. What is the difference? There are two different legal processes. A financial settlement can be done whether you are married or not married, so you can be a de facto couple, you don’t necessarily need to be married. Whereas divorce, you must be married to go through the divorce process. So divorce is at its simplest, the legal process of ending a marriage. So, you have your marriage certificate saying that you’re legally married. The divorce essentially declares the marriage null and void, and then you’re free to remarry or you’re no longer considered married, married that’s just the objective of it. 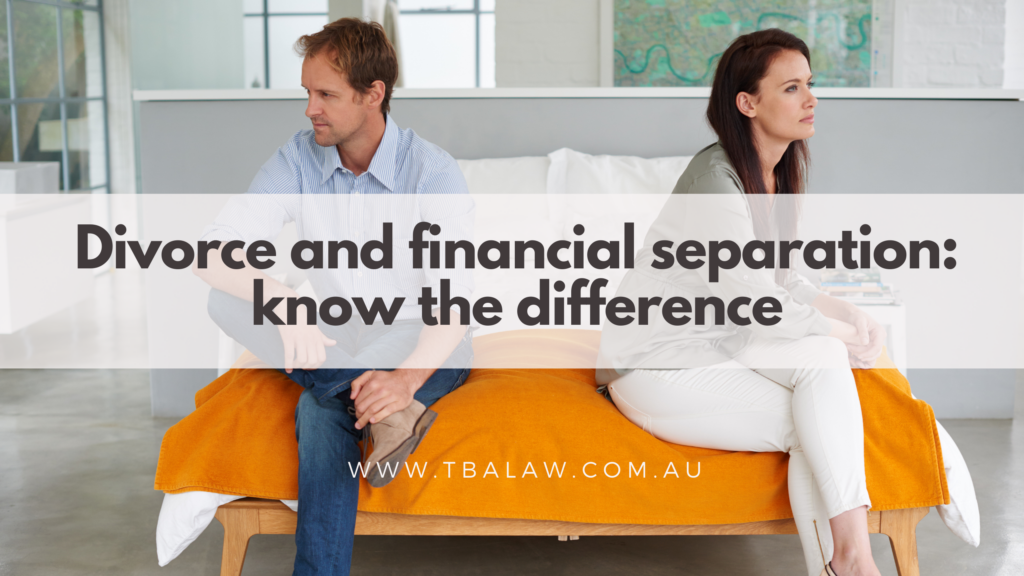 Whereas, financial separation is the process of dividing assets. Sometimes people will think once they’ve divided their financial assets, they’re automatically divorced, or by divorcing someone they have certain entitlements under financial separation that happens automatically. That’s not true. They’re two very different processes with different timelines, although they can be done concurrently. For divorce, you need to be separated for at least 12 months to apply for a divorce. If you separate on the 1st of January 2020, you can apply for a divorce on the 1st of January 2021. Whereas with a financial settlement, there’s no actual date that needs to have passed when you are married to start seeking a determination from the court.  Six months may have passed and you may decide it’s time to split your financial assets. The main reason for that is you don’t want parties living in limbo with their financial assets for a year while they wait till they can apply for a divorce.

The outcome of a divorce is that you’ll have a divorce order in place saying that you are no longer legally married, whereas with a financial settlement, you should end up with what you hope will be a court order that says how you’re dividing your assets and liabilities, i.e. one party keeps the house, the other party keeps the cars or something like that. The outcomes are very different.

Financial settlement is a trickier process. There are different ways it can go about. Sometimes parties come to an agreement themselves and they finalize it, in either what’s called a binding financial agreement or a consent order. But in terms of making a court application, that’s when those time limits really apply. To make a court application, normally these parties tend to negotiate first, and that can take several months sometimes depending on the issues at hand, what the assets are, and if there are any disputes as to what those assets are worth. From there if there’s still no resolution, parties will often be doing the initiating application and filing in the Federal Circuit Court, which then goes to a first mention. From there, from the first mention, then goes to what’s called a conciliation conference normally. This is a form of mediation facilitated by the court for the sole purpose of trying to figure out the assets without the need for a judge to make a decision.

If that still can’t be reached, there might be further mentions in the court, or it could go all the way to final trial, but it does tend to be quite a lengthy process. It can take up to sometimes conservatively a year and up to two or three years, depending on the complexity of the case and how busy the courts are. Whereas, divorce tends to be a lot more quickly. Normally from launching an application to the hearing date, it’s normally less than six months. So obviously a lot quicker. The other aspect of separation is often children as well. The important thing to note is there are no time limits in making an application for children. If you have an agreement now and you get divorced now there’s no time limit, is that if that agreement stops working, you then cannot make a claim. So if you were to divorce today and you had a good agreement in place, but in four years’ time, it is no longer working, you still have the right to go to the Federal Circuit Court if needed to try and have the court determine the issues in dispute.