Skip to content
Powers Of Attorney And Elder Abuse

Powers Of Attorney And Elder Abuse

Elder abuse, just like any abuse of a vulnerable person, is insidious and quite often has some grey areas. When it’s clear, it’s clear. But sometimes, a carer or family member may think that they’re acting in the best interest of the person. But in fact, a reasonable person, looking on the outside, would not agree that what they’re doing is reasonable.

Elder abuse comes in a lot of forms, as in, it could be the fact that they isolate the elderly person from their friends and other family members. It could be primarily just about control. It could also be financial abuse, so the money from of the elderly person could be taken off them and they may no longer have access to their own funds to have any resources, to be able to get things that they want, or to be able to escape the situation if they wanted to.

Sometimes the abuse is also similar to the neglect of a child. So, not only isolating the person from the outside world, but also isolating them within the home, as in, they rarely give them any attention, they’re not fed properly. And then the more overt things that warrant or come under abuse are obviously physical violence and verbal violence. It’s horrible to think that someone at the end of their life would be subject to these things. 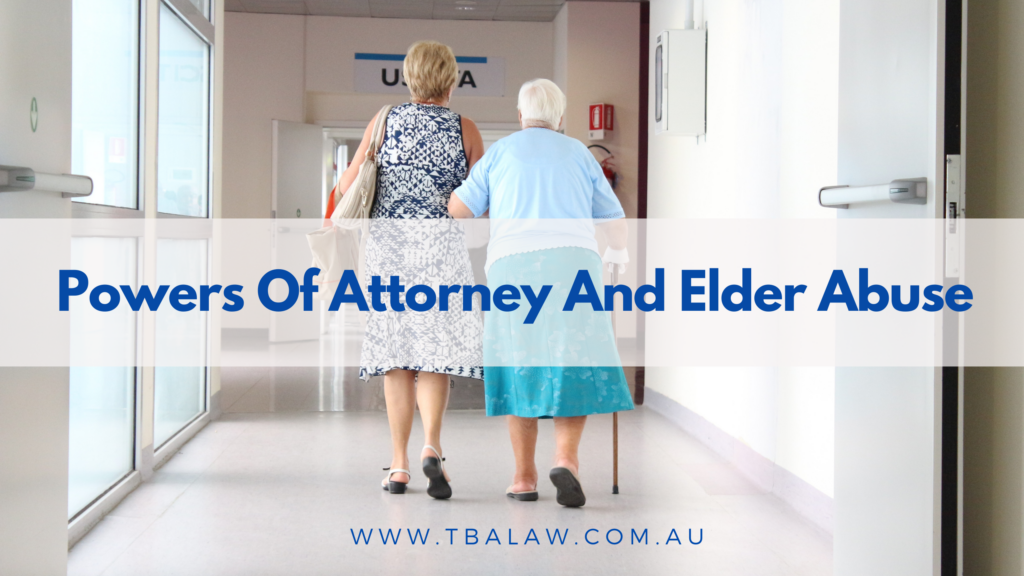 What changes have you seen in the last five years regarding elder abuse prevention, and what can you do to prevent an elderly person in your life from being vulnerable to abuse?

Where there is no power of attorney in place, it can be a real struggle to sort out an elderly person’s finances. For example, the elderly person might have given their carer or family member access to their EFTPOS card or internet banking details. People take advantage of elderly victims by stealing money from them either without their knowledge or blatantly to the point where they are scared to do anything about it.

When there is no power of attorney in place, it is a criminal offense. And realistically, the problem must be reported to the police and the police must investigate. However, there must also be someone else in this elderly person’s life keeping a watch out for them to even know that it’s necessary to report the problem.

If there is a power of attorney, then the law was changed in 2015. But before then, if someone with a power of attorney stole from their elderly relative, they would only have been guilty of fraud or theft. They might have been reported to the police but they would probably be told that it is a family matter or that it is a civil matter. Nothing could have happened since it was only a debt.

So, in the new law for enduring powers of attorney, it is now a criminal offence for a person with power of attorney to act against the best interests of the person who appointed them. This applies to cases of abuse—elder abuse or cases where someone doesn’t have capacity and someone is operating with a power of attorney.

When power of attorney is appointed, the person is placed in a position of great responsibility. They cannot use their power for personal gain. They must act in their friend’s best interest, and avoid mixing their own finances with those of their friend who has been made a power of attorney. As well as that, they cannot give gifts to themselves. These are the ethical components of being an attorney with power of attorney, and when an attorney acts in a way which breaches these rules, there are criminal offences brought against them—and orders can be made for them to pay back money if it remains after they have spent it in ways which breach their responsibilities.

But all that being said, again, there needs to be someone around who’s looking out for the elderly person to even see that the power of attorney is doing the wrong thing, to report it and bring it to VCAT. VCAT’s the jurisdiction to have a power of attorney removed and to have an investigation. And it’s VCAT that can make orders for compensation and refer the matter for prosecution. So really, really tricky stuff.

Some of the other ways that you can try to minimize a power of attorney from doing the wrong thing is to have multiple people appointed as power of attorney, so they can keep an eye on each other. But the other thing as well is that quite often, prior to 2015, a lot of powers of attorney said that they began immediately. So even if the elderly person hadn’t lost capacity, they’re just getting a bit frail and they’re wanting to rely on a support person but have got their full wits about them. Quite often, the powers of attorney began even then. But now, we’re putting clauses in to say it doesn’t begin until a doctor says that the person has lost capacity.

If an elderly person is isolated in their home and somewhat fearful, starting to get frail but still has capacity to manage their own affairs and make their own decisions, then the power of attorney wouldn’t start. The people appointed under that wouldn’t have access to the bank accounts unless the elderly person gave it to them inadvertently and not legally.

There’s a couple of tips in drafting a power of attorney that can minimise the likelihood of elder abuse. But ultimately, it is also about really having some community awareness and looking out for elderly people around you and in your own family. Not that we should be overly cautious and suspicious, but most of the time it comes down to someone who notices that needs to report what’s going on, which is very difficult.

This is why elder abuse can be even more insidious than child abuse in some ways. Because children should be going to school and be seen in and around the community far more potentially than an elderly person, who might just fade into the background of the community and not really do much outside of their home.

It is an ongoing issue that the legislators continue to look at. And certainly, the legal industry is developing more and more best practice around what to try and do for our elderly clients. However, if we see an elderly person only once every two or three years, and even then for only a short time, it is hard to ascertain their exact state of health. So it is most important that professionals work together as much as possible in such situations, particularly the medical industry and legal industry.

But again, if we see an elderly person every few years and for only a short amount of time, it’s hard to know how they’re doing. So it makes sense for professionals who deal with both medical and legal issues in these cases to work together as much as possible.